Tech and tech-enabled companies continue to dominate YouGov’s 2020 rankings of the best global brands – as decided by consumers around the world.

Google tops the rankings for the fourth year in a row. And eight of the top ten best global brands are technology-based. The only exceptions are retailers IKEA and sportswear giant Nike.

YouGov’s ‘Best Global Brand’ rankings are calculated using data we collect every day for our BrandIndex tool from members of the public in markets around the globe. Each brand’s performance is tracked daily against a range of metrics. Then, our Best Global Brands ranking is determined using their Index score – which assesses overall brand health. It takes into account perceptions of a brand’s reputation; whether consumers would recommend the brand; and whether it represents good value and quality.

YouGov’s BrandIndex draws data from 11 million interviews across 40 sectors and 40 markets globally. This year’s ranking includes the views of more consumers than ever before, from Vietnam to the USA and from China to Germany.

The ranking features the same top four - in the same order - as last year. Behind the world’s biggest search engine Google, comes WhatsApp, YouTube and Samsung. Amazon moves up from sixth in last year’s ranking to fifth this year, replacing the social media giant Facebook which places seventh. Netflix jumps from tenth in 2019 to sixth in 2020. Meanwhile, PayPal falls out of the top ten altogether. Singaporean online shopping platform Shopee, which serves users across Asia and South America, replaces the online payment platform.

In a sign of how the world’s economy continues to change, only half of the top ten focus on selling (or enabling the sale of) physical goods – Samsung, Amazon, Shopee, IKEA and Nike. The rest make money in other ways (if they do at all).

Outside the top ten, the ranking has a more traditional flavour. It features familiar names like oral health brand Colgate and skincare brand Nivea, which have been sold to consumers for more than a century.

Toyota and Mercedes are the only car manufacturers to make the top 25, with the former climbing eight places in this year’s rankings. The Japanese automaker has come a long way since the recall scandal which rocked the brand ten years ago.

Panasonic is Samsung’s only electronics rival in the top 25, although it scores significantly less than its South Korean rival. LG fell out of the ranking this year, having placed 18th in 2019.

Other familiar brands to make it into the top 25 include toy brand Lego, sportswear brand Adidas, fashion retailer Uniqlo, and financial services provider VISA. VISA is one of four Olympic sponsors in the ranking and one of two FIFA World Cup sponsors.

Get the full report on YouGov's Best Global Brands here.

Who Didn’t Make the Cut

With many of the world’s holidaymakers forced to stay at home during the COVID-19 pandemic, no airlines feature near the top of the table, although a number sit just outside. Likewise, there are no travel agents this year as Booking.com drops out of the top spots.

The banking sector also fails to make a dent. And, despite their global footprints, there’s no room for fast-food companies or carbonated drinks brands.

This just goes to show that, for consumers around the world, being well-known is no guarantee of being considered one of the best brands.

You can read more about YouGov BrandIndex here and reach out to us at hello@yougov.vn to learn about how we can start tracking your brand. 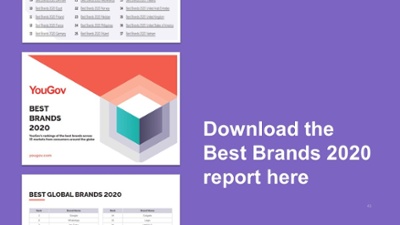 Never miss out on the latest insights